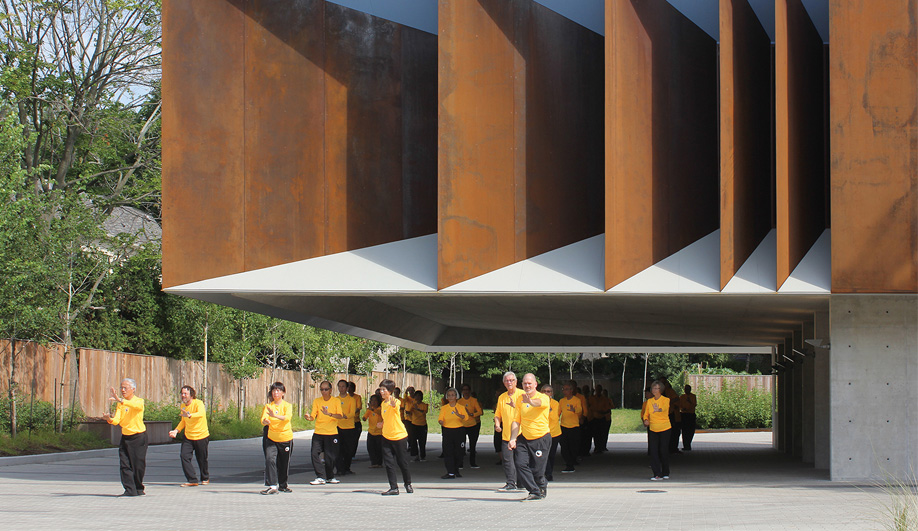 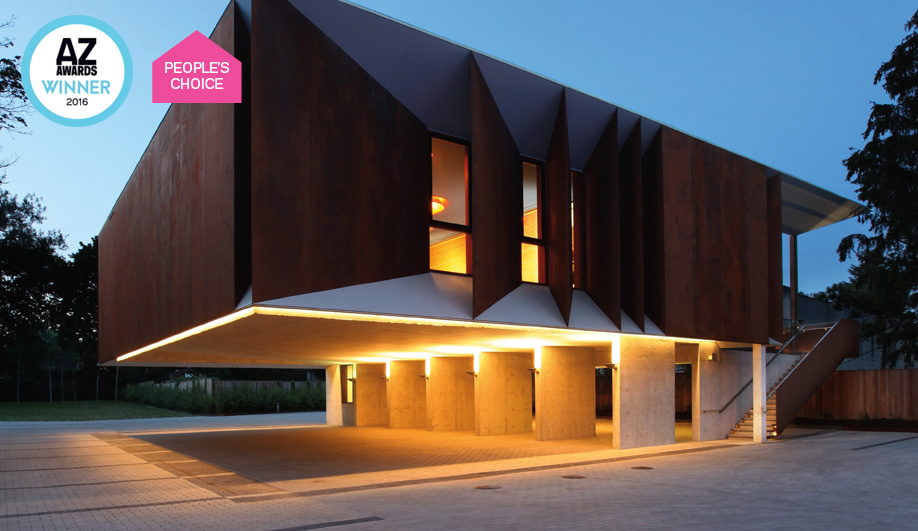 Like a tai chi stance, the makes its presence felt with an elegant pose of gravity-defying equilibrium. The single volume rises above ground via two pre-stressed concrete cantilevers – one five metres in length, the other 10 – making it one of the long­est in North America. This balancing act is held in place by seven pillars that almost seem too few and too slender to carry the load. It’s impressively eye-catching, a pleasing mix of tension and poetry, where state-of-the-art engineering creates an ultra-modern house of worship for centuries-old religious sects.

Just as striking is the pre-weathered steel cladding, which fans out like giant louvres on two sides. The fins are there to control views into the floor-to-ceiling windows and block out some of the surrounding neighbourhood. From outside, they create an optical illusion, as if the windows are nested into much deeper recesses.

The initial reason for elevating the temple was purely pragmatic. Because it’s located in a commuter neighbourhood north of the city, where monster homes line busy streets and cars remain the primary mode of transpor­tation, the firm had to accommodate generous parking at street level. Yet even that practical consideration gets a dynamic twist, as the congregants (adherents of Taoism, Confucianism and Buddhism) use the resulting covered area as a protected terrace, ideal for hosting anything from tai chi sessions at dawn to lion dance events. 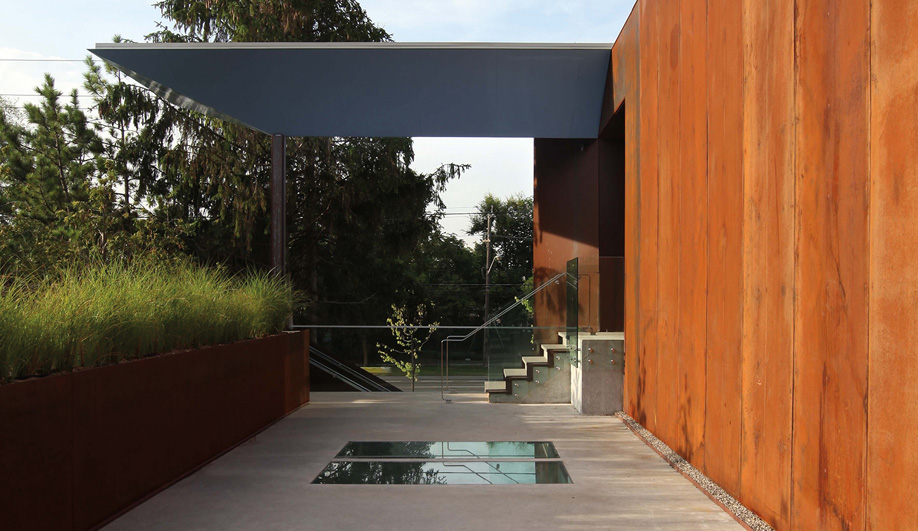 Two staircases and an elevator lead worshippers to the interior, where the mood changes to a traditional temple setting, with wire-brushed cedar lining the walls. One of the main insertions was to add red ceiling lanterns, which double as motorized skylights, funnelling in natural light and diffusing the incense. Inside and out, the temple shows a profound respect for the people who now gather there. 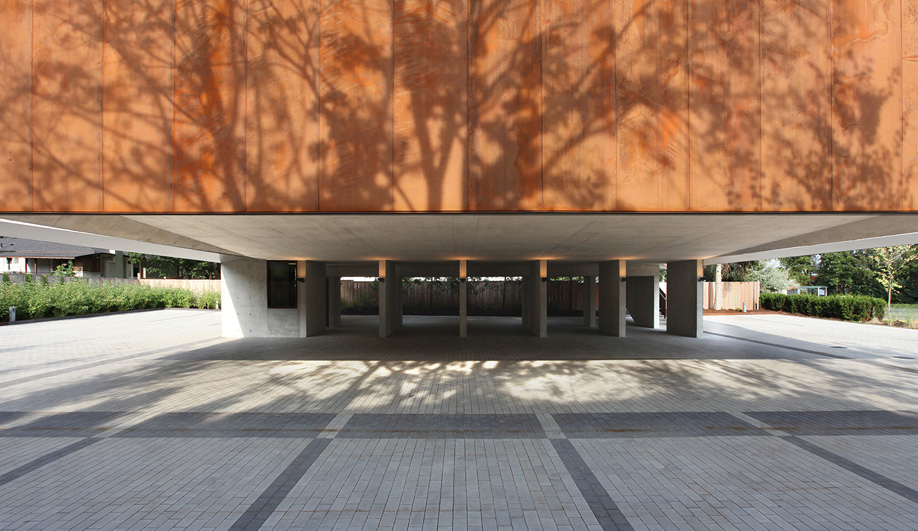 About the firm: Shim-Sutcliffe Architects, one of Canada’s most celebrated firms, pours time and attention into every detail, right down to custom handrails, door hinges and the occasional piece of furniture. Integral House in Toronto, one of its best-known projects, is considered a masterpiece, likened to such seminal works as Le Corbusier’s Villa Savoye. Despite the studio’s global reputation, it remains small, with a staff of eight.

What the jury said: “Absolutely breathtaking. The temple is in perfect harmony with its environment, yet it has its own identity. And the engineering of that incredible cantilever? It’s a remarkable feat.” – Anna Simone 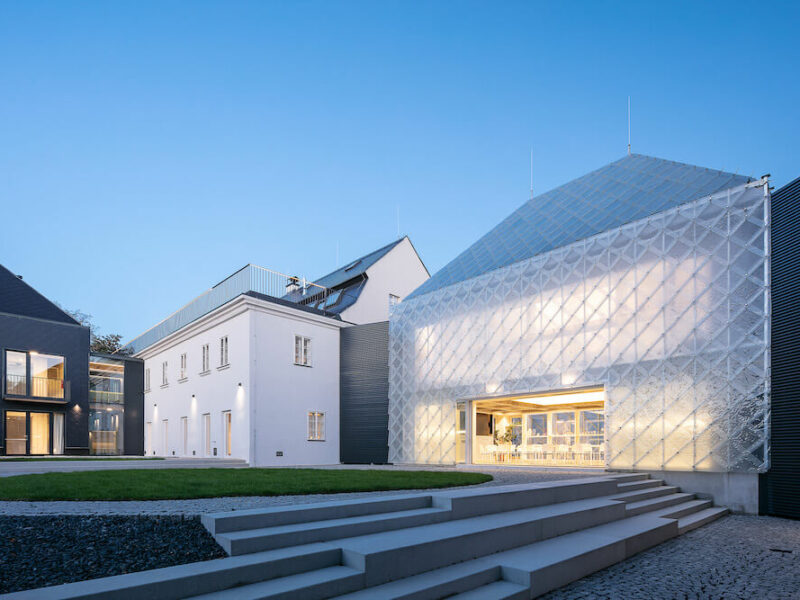 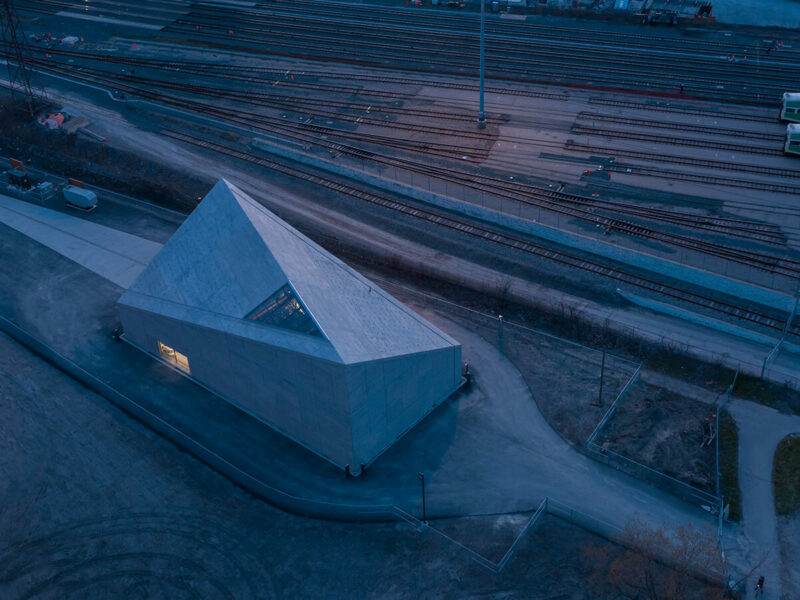 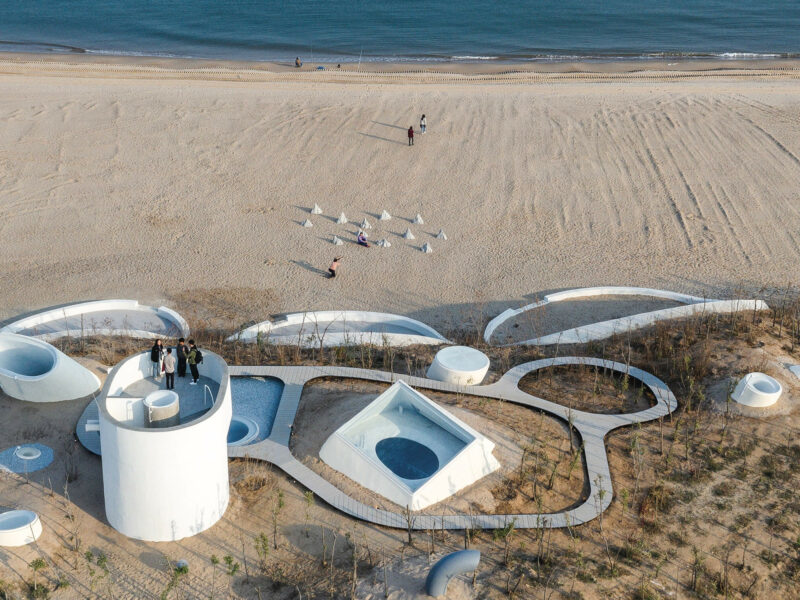